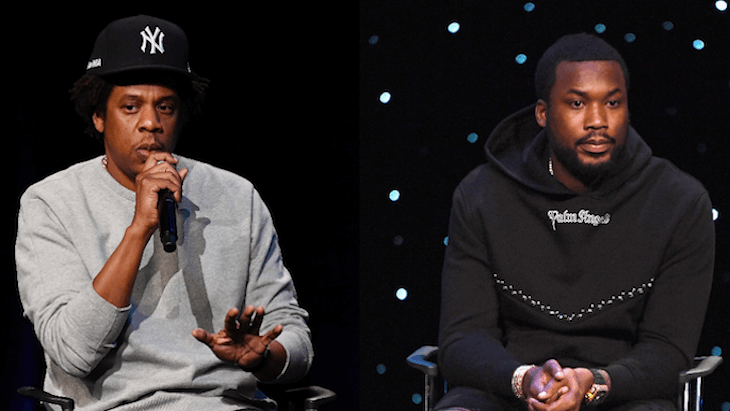 Meek Mill has left Jay-Z’s Roc Nation Management, the company that has overseen his career since 2012. Meek Mill is no longer featured on the Roc Nation website or its social media profiles. The news was first reported in Billboard.

The move is presumably a complicated one, as Meek’s connections with the Roc Nation runs deep. Meek has a joint venture deal with the company for his Dreamchasers label, and more prominently, the Reform Alliance — a non-profit organization he launched with Jay-Z to combat unjust sentencing laws in the United States. The latter was formed after Meek was sentenced to two to four years in prison for probation violation in a controversial ruling that the Pennsylvania Supreme Court later overturned, following a high-profile campaign for his release that saw Rev. Al Sharpton, New England Patriots owner Robert Kraft, and even Philadelphia Mayor Jim Kenney all visiting the rapper in prison. Jay-Z wrote an op-ed in the New York Times  in which he said, “What’s happening to Meek Mill is just one example of how our criminal justice system entraps and harasses hundreds of thousands of black people every day.”

However, in recent years he expressed frustration with his label, Atlantic Records, even though his most recent album, “Expensive Pain,” scored a No. 3 debut on the Billboard 200.

“They didn’t put nothing into expensive pain and then said I can’t drop another project for 9 months at the end of my contract after I made them 100’s of millions ….. how would can anybody survive that … most rappers can’t speak because they depend on these companies “I don’t,” he tweeted, also accusing the label of damaging his relationship with multi-platinum rapper Roddy Ricch. “I made Atlantic records 100’s of millions and let them rape me out Roddy an artist they came to me about in jail…  Roddy my youngin still …. But that label separated us instantly when the millions came in from him.”

All I seen today was meek and roc part ways …I’m personally handling my own business so I can take risk and grow ..we came to that agreement together..I have a label deal with roc for my artist and I got reform super tied with them and many other investments wit jigga https://t.co/y36jgmBQJz