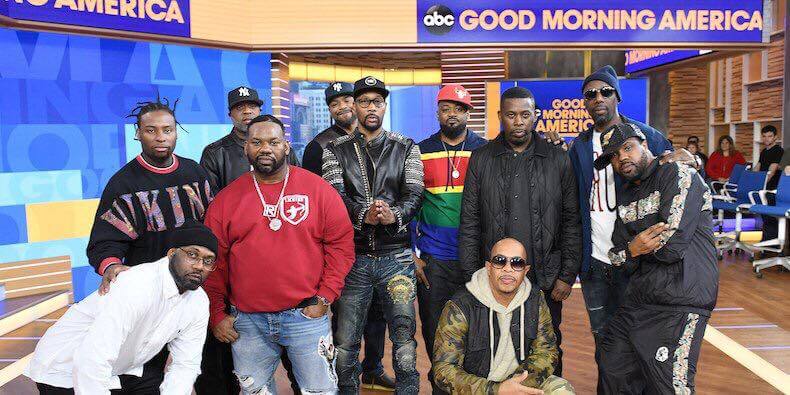 First of all congratulations to the Wu-Tang Clan. Bar for bar the most power punched collective in the history of Hip-Hop. In celebration of the 25th anniversary of their debut album Enter The Wu-Tang: 36 Chambers The Wu took to Good Morning America to not only celebrate their accomplishments for their wide range of fans worldwide but to promote positively for their new short film For The Children: 25 Years of Enter The Wu-Tang (36 Chambers) made possible by Certified.

Everything seemed to be all love and then The Clan took to the stage to perform Protect Ya Neck and the censorship ran wild. Almost half of the song was blocked out by the network causing Soccer Moms nationwide to Tweet their displeasure in letting the legendary collective perform and celebrate on this platform.

Protect Ya Neck was more of an underground cult classic so we can be safe in knowing that many of the people complaining about how inappropriate the performance seemed to be don’t even realize the lyrics the network was blocking out weren’t even curse words or inappropriate lyrics at all.

Check out the performance and lets break this down.

Raekwon comes in and you think maybe they just made a mistake on Deck’s verse but no. This whole phrase on Rae’s verse is censored out “So if you wanna try to flip, go flip on the next man. Cause I grab the clip and hit you with 16 shots and more, I got” not even giving Rae an opportunity to clean up the “16 shots” part if that was even a concern for the networks.

Method Man is a superstar and didn’t get the benefit of the doubt during his verse either as the morning show edits out his bars “get it off, let it off like a gat I wanna”. Meth also got ” yo, check out the flow like the Hudson or PCP when I’m..” & “sauce, the smoke from the lyrical blunt make me *cough*” blanked out as one curse word.

Now it’s Ol Dirty Bastard’s son time to get over-edited and they wasted no time. Almost immediately Young Dirty Bastard jumps in his father’s verse with high energy and gets the bars “f***in’ with the worst. I’ll be stickin’ pins in your head like a f***in’ nurse” blocked out as one word. Mind you every member was editing themselves during this performance knowing it’s on television and they are 25 year vets in the game. Ghostface comes in and gets his bars ” catch it like a psycho flashback I love gats; if Rap was a gun, you wouldn’t” blanked out. At this point the at home audience for Good Morning America is Tweeting like crazy.

RZA gets a similar treatment when his bars “black, we don’t need that. It’s 10 o’clock, ho, where the f**k’s your seed at?” get totally blanked out. By the time we get to GZA’s verse I guess the censors felted they would give their bleep bleep buttons a rest.

This made for terrible television, and for people who had never heard this song or even heard this group it makes them look unprofessional and as 25 year vets it honestly makes these grown men look uncivilized. Shame on Good Morning America for allowing Wu-Tang to be shown in such a light on a day they should have been celebrated.

Down the line this performance will be used as an example of why NOT to put Hip-Hop on a stage like this to reach a larger audience. It’s unfortunate because Wu-Tang didn’t say or do anything that would warrant that type of restriction. Whoever was behind the editing button at Good Morning America made that decision for them. Causing The Clan to look like lewd unprofessional performers that had no restraint for television censorship guidelines.

Watching the Wu Tang Clan on @GMA Is pretty hysterical. I think they have muted more than 50% of the song. Lol #cleanlyrics #parentaladvisory

Sorry @GMA Wu Tang Clan was a fail today. They knew it was a morning show with kids and still proceeded to cuss and be nasty. #norespect

@GMA It's disgusting and don't make sense why have Wu Tang Clan on if you have to bleep every other word they rap?

Wu-Tang is performing Protect your neck, they blanking out parts with no swears and Ol Dirty son is doing his part! — watching Good Morning America

My mom is learning about the Wu-Tang Clan on Good Morning America. My sister says she’s into the Wu. Every time I think I have Maa figured out, she surprises me. I want to make her a playlist on the history of hip hop. Suggestions? Cleanish tracks, please. She dislikes swearing.