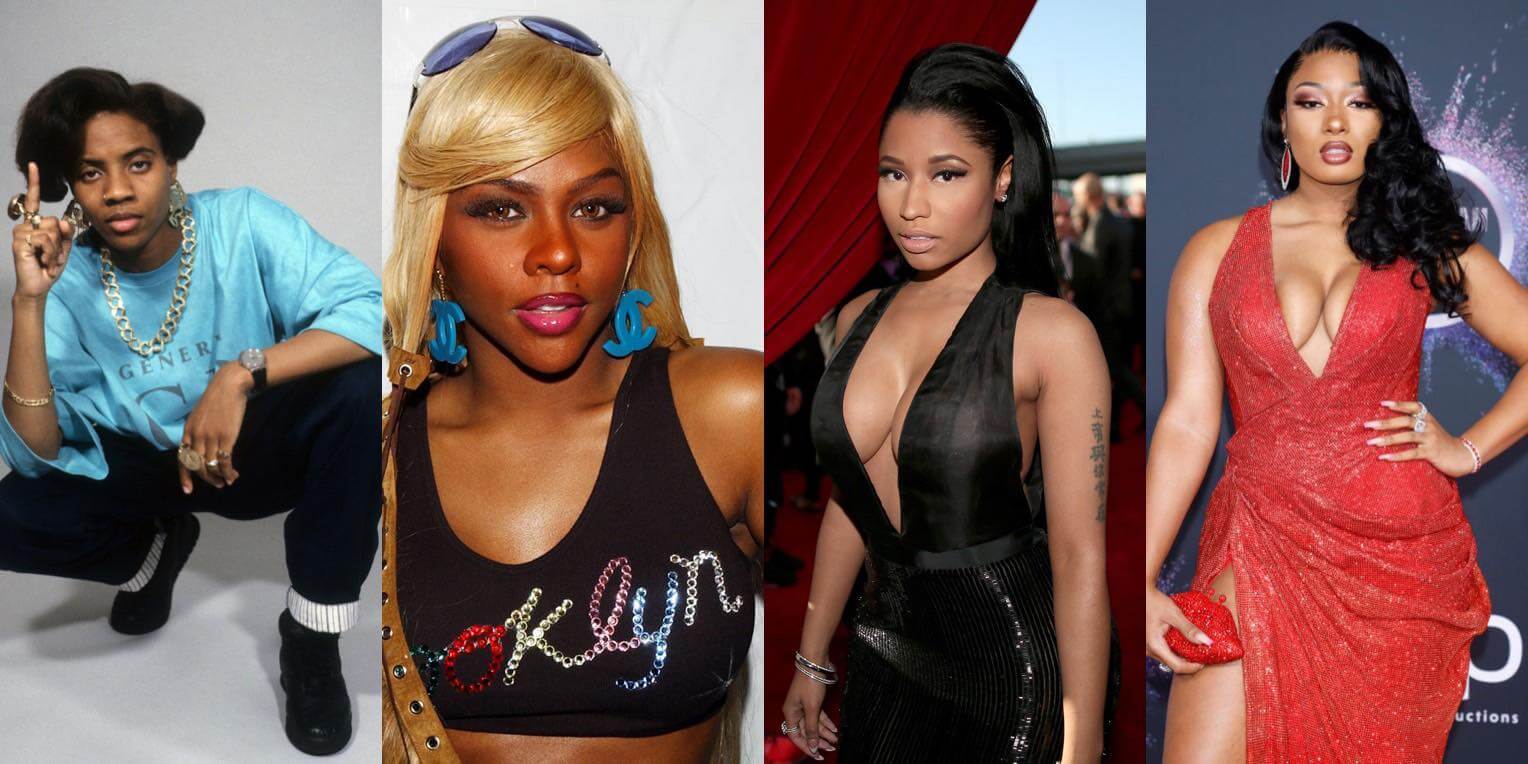 “Hip hop started out in the heart… now everybody tryin to chart.” – Lauryn Hill

When hip hop started back in the 80s it was very much a Black male-dominated industry. The few females that did drop were like unicorns in the game and often, their abilities were compared to their male counterparts. Today, although there are still more male rappers, female emcees are found at the top of the charts, battle rapping and winning awards for their music. They’ve come a long way from sliding that demo tape they made in their homie’s basement to the best rapper on the block, but are these ladies really in a league all their own?

As a 34-year-old native New Yorker, I was introduced to hip hop in the ’90s. I can vividly recall hearing Jay-Z’s Hard Knock Life album and Lauryn Hill’s Miseducation in my older brother’s Durango and was hooked ever since. When I got older I realized that I had missed the initial era of beatboxing and break dancing so I decided to go back and see how this genre had all started. The moment I found out that it actually started in my home borough of the Bronx, I knew I had found something special. But where did the rappers who looked like me start? I clung to Left-Eye and memorized Lauryn. We played Lil’ Kim and Foxy Brown at the block parties but who really kicked down that door for us to be included as women? I started looking…

Since he is 15 years older than me and was the first one to introduce me to hip hop I figured talking to my brother was a good place to start. Over Facetime, he told me that Roxanne Shante was the first female emcee he remembers hearing rap. He recalled her being down with the Juice Crew All Stars and ironically when she started she really had no females to battle. He said she was respected in NY because she ran with a crew of dudes who rapped too. Later, he said another female rapper came out with the name Shante and there was a big issue between them because Roxanne Shante felt she had rights to the name. This was just the kind of underground information you got growing up in the birthplace of hip hop. I told him to elaborate.

He said Sha Rock came a little later but after doing some digging in the crates I discovered she actually came before. Although a quick search revealed that Sha Rock is considered by many to be Hip-Hop’s first female Emcee as a member of Funky 4+1. However, unlike Roxanne Shante, she did not get as much shine which he attributed to the fact that Sha Rock didn’t have a whole crew of dudes who were well known for their rapping skills. He then said Queen Latifah came out with her Afrocentric look and conscious lyrics that were meant to bring awareness to the issues facing the Black community. He said that conscious rap was a movement at the time (one that still lives on today but is not considered as popular as mainstream rap.)

He made sure to note that the sexualization of rap, particularly with female emcees did not really rise until Lil’ Kim and Foxy Brown came on the scene. Still, he did give his flowers to Eve as being one of the first modern-day rappers to combine both the sexiness and street swagger of a female rapper who rode with a whole crew of dudes- the Ruff Ryders. He said once the music started coming out of the south Trina and Khia were prominent for their delivery and the way they flipped that mentality that guys were the only ones that could rap about sexuality.

Mc Lyte’s album Lyte As a Rock dropped in ’88- the year I was born. Her song “Ruffneck” (1993) led her to be the first female rapper nominated for a Grammy. Queen Latifah soon followed up with her hits “Ladies First” (1989) and “UNITY” (1994) and you can’t talk about early female emcees without mentioning Salt-N-Pepa who really helped create that larger-than-life image with hits like “Let’s Talk About Sex” (1990) and “Shoop” (1993). These were the founding mothers of the music that I and many others grew up listening to. What they did shape our opinions on what roles women in hip hop could and would play. They truly laid the foundation.

I could hear the sincere excitement in his voice when he talked about one of the female emcees from our neighborhood- Champ MC. You might not know of her because she was more of a local performer but she was known around Edenwald Projects which was near where we grew up in the Bronx. He said she was also one of those women who hung out with the boys and ended up becoming a member of the all-female Wu-Tang-affiliated group called Deadly Venoms.

One thing that he said broke my heart a little. He said he never really considered Lauryn Hill a rapper but rather a singer because of her place in the Fugees. This to me was blasphemy but one of the most amazing things about hip hop is that there is so much diversity- not only in the music but also in the people who listen and how they receive it. I went to do my own research.

In my early tween and teenage years, Missy Elliott was up next with her animated persona and unique rapping style. Working closely with Timabland- arguably one of the best producers in the industry- she brought a flavor of whimsicality to the music. It was art and it was raw and it was fun. Chicago native Da Brat’s one-of-a-kind voice and delivery made her stand out amongst her male and female peers. She was also the first female solo rapper to go platinum with her debut album Funkdafied.

Ruff Ryders’ First lady, Eve came out in the late ’90s with Let There Be Eve- her first album, climbing the charts and eventually hitting number 1 on Billboard. All of these artists did the groundwork for women in the industry and we didn’t know it then, but they were destined to be followed by a generation of new female emcees who would take off running and help make hip hop music mainstream.

If you fast forward to the 2000s and into today you start to see lots of new names pop up and not only bring a fresh style to the genre but also go on to become megastars in their own right. When people think about modern-day female emcees they are sure to include Nicki Minaj whose debut studio album Pink Friday was nominated for a Grammy. Having been influenced by several of the rappers I mentioned previously, Minaj took on the persona of barbie with a colorful, animated appearance and punchy, theatrical lyrics. Minaj has worked with the top names in hip hop including Jay-Z, Kanye West, Lil’ Wayne, and Drake to name a few.

Despite her success, Minaj, like many rappers, has had “beef” with other female emcees that resulted in diss tracks. One of those encounters was with fellow New York rapper Remy Ma, who also made several hit records in the 2000s. Although these conflicts may come off as petty where many hip hopheads feel women in hip hop should be building each other up instead of breaking each other down, rap beef has pretty much always been a part of hip hop. Just like the men, diss tracks are a way to assert one’s dominance and talent by creatively disrespecting their opponent. Both women held their own and like any true rap beef, fans were quick to take sides.

In the last few years, a new generation of female rappers has emerged. Perhaps, one of the most notable is Megan Thee Stallion who took home three Grammy awards in 2021. A Texas native, Megan has already set out to prove herself as one of the top female emcees of the era. Cardi B who also hails from the Bronx has also won a number of awards for her music including a Grammy for best rap album with Invasion of Privacy in 2019. Known for her explicit lyrics and New York swagger, Cardi B consistently releases hit after hit.

Today, the list of emerging female rappers is growing. With a quick internet search, you will find music from artists like DeJ Loaf, Doja Cat, Young M.A, Coi Leray, and Kash Doll. Keeping with the true nature of hip hop, all of these artists have styles that are different from one another. Many of our readers are already privy to the Buffalo, NY Label Griselda but have you yet taken a listen to artists like Che Noir or 7xve The Genius? As they progress in the industry I will definitely be watching as their careers develop and take shape. The music we love has gone through several metamorphoses from where it started back in the Bronx in the 80s. The new generation has the luxury of hip hop history and the catalogs of the OGs to pull inspiration from all while contributing a fresh perspective. I am excited to see where these freshmen will take the art form that has become such a pillar in world music.